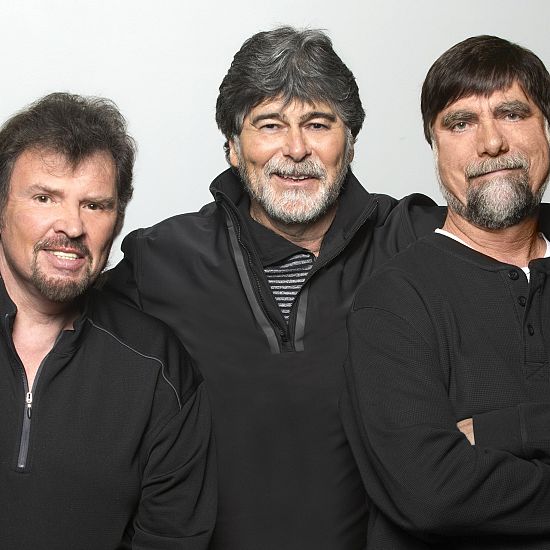 It's been over 50 years since a trio of young cousins left Fort Payne, Alabama, to spend the summer playing in a Myrtle Beach, South Carolina bar called The Bowery. It took Randy Owen, Teddy Gentry and Jeff Cook six long years of tip jars and word of mouth to earn the major label deal they'd been dreaming of, but then seemingly no time at all to change the face of country music.

ALABAMA is the band that changed everything. They reeled off 21 straight #1 singles, a record that will probably never be equaled in any genre. They brought youthful energy, sex appeal and a rocking edge that broadened country's audience and opened the door to self-contained bands from then on, and they undertook a journey that led, 73 million albums later, to the Country Music Hall of Fame and the Hollywood Walk of Fame.

Of the early days and their humble beginnings, Jeff says, "I don't think we thought too far ahead. We were more concerned with paying our bills at the end of the week playing music."

The Bowery was a chance to get established outside their home turf, where they'd played a nearby theme park, opening for national acts like Bobby Bare.

"We believed we had something pretty special from a vocal standpoint," says Teddy, "and we were looking for the opportunity to prove it. There were a lot of times when we wondered whether we might be better off going back home and getting jobs, but we just kept rehearsing and writing songs, trying to get better and believing we could do it."

"I went to see them at The Bowery," legendary producer, Harold Shedd says, "and the sound that these three guys could create together was just really something. I saw the crowd reacting to music they'd never heard before as though they had. They were doing some covers, but a lot of the ALABAMA show at the time was original material, including stuff that wound up on the first three albums we did together."

The band was revolutionary in more than one sense.

"We were renegades in sneakers and T-shirts," says Teddy. "We had long hair and played loud and some of the country folks resisted us for a while. But then of course they did accept us and then after that, our success made it lots easier for other bands to try it in country music."

The fact that some of the heirs of that legacy--Eli Young Band, Rascal Flatts and Florida Georgia Line--were among the stars paying tribute on Alabama & Friends, their most recent release, is part of their legacy as surely as the awards and plaudits they've earned through the years. And those, of course, have been legion. They include more than 150 major industry nods, including two Grammys, the Minnie Pearl Humanitarian award, Entertainer of the Year awards three times from the CMA and five times from the ACM, as well as the latter's Artist of the Decade award. They earned 21 Gold ®, Platinum ® and Multi-Platinum ® albums and were named the RIAA's Country Group of the Century.

But awards are only a part of a legacy that finds its most important home in the hearts of listeners everywhere. Some of those are superstars in other genres, as Randy found out not long ago.

"I was part of a benefit concert at the Ryman," he says, "and I look over there's Jon Bon Jovi. He walked over and said hello and it turns out he likes our music."

Many more, of course, are everyday country fans.

"A lot of fans will start a conversation with, 'I don't want to bother you,'" says Jeff, "but what they don't understand is that everything that's happened to us, every one of those awards, happened because we've been accepted and supported by our fans."

Not long ago, Teddy was witness to a scene that shows that their legacy of song remains as fresh as it was when that streak in the '80s kicked it all off.

"I was in Nashville," he says, "walking by this club full of young people--I'm talking 18 or 20. The band started playing 'Dixieland Delight' and everybody in the place started singing and sang all the way through. I had to smile at the longevity of the songs. Maybe some of those kids didn't even know who ALABAMA was, but they knew the music, and so I think that's a tribute to the fact that we spent a career putting out good songs that stand the test of time."