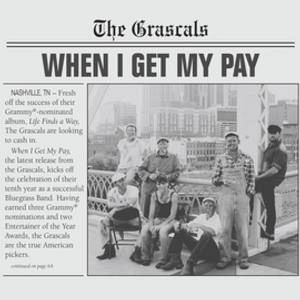 The Grascals are famous for all-star collaborations on their toe-tapping bluegrass tunes, and their eighth studio release, ‘When I Get My Pay,’ will be no different. Friend of the band, Dierks Bentley can be heard on the single ‘American Pickers.’

“We’ve always had fortunately a lot of  friends in country music from Dolly (Parton),  we’ve opened tours with people, you know, Brooks & Dunn and Hank Jr. So, we’ve got  a lot of those kinds of  friends in that world,” says band member Danny Roberts in an interview with Nashville Fox 17. “Dierks has always been a friend of the band. [Grascals bandmate] Terry Eldredge used to sing with a group called the Sidemen at the Station Inn and when Dierks came to town, he kind of credits Terry for getting him singing.”

Banjo player Kristin Scott Benson says that the single was inspired by the band’s love of the hit TV show ‘American Pickers.’ Music City is home base for the show’s Mike Wolfe and his store, Antique Archeology.

“[Lead singer] Jamie Johnson was doing a charity event … and he met Mike there and we’re all big fans of the show,” Benson says. “He just went up and said, ‘Man, we love your show! Have you got a theme song?’ — completely knowing that they didn’t.”

The Grascals have been bluegrass staples for nearly a decade, and they recently welcomed new fiddle player Adam Haynes.

“After eight albums you would think you would get tired of it, but with each one you get just as excited with it and think, ‘This is the best one yet!’” Roberts says.