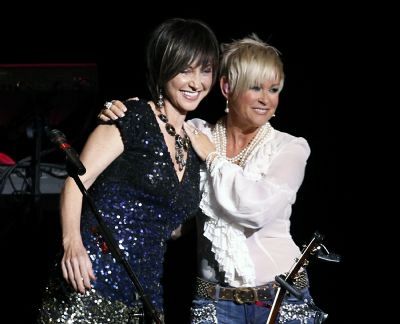 This past Saturday night, I had the immense pleasure of seeing two favorite artists of mine – contemporary country legends Pam Tillis and Lorrie Morgan – perform live in concert at the newly completed Southern Kentucky Performing Arts Center (SKyPAC) in Bowling Green, Kentucky.  The SKyPAC is a beautifully decorated 1800-seat venue with excellent acoustics, thus providing an ideal atmosphere for Tillis and Morgan’s fantastic Grits & Glamour show.

The Grits & Glamour tour is all about the fans, and all about great music.  No unnecessary gimmicks, bells, or whistles – just Tillis and Morgan singing their hearts out, joined by a small four-piece band.  Both ladies were in fine voice, boasting some absolutely gorgeous harmonies, as they performed together backed by fiddle, bass, guitar, and keyboard.  Such simplicity created a warm, laid-back, almost familial environment as Tillis and Morgan treated the eager crowd to a selection of best-loved tunes, all the while cutting up like one would expect from a couple of longtime girlfriends, and sharing often-humorous personal anecdotes – such as Tillis’ account of being mistaken for Patty Loveless at a Waffle House, by a fan from Knockemstiff, Ohio. (Google it – It’s a real place)

The bulk of the concert set list consisted of a selection of well-known hits from both artists, finished off with covers of classic songs that are close to their hearts, as well as some more recent cuts.  The two opened the show with a lovely duet version of Joni Mitchell’s “Both Sides Now.”  From that point onward, they alternated between performing Morgan’s hits and Tillis’ hits, beginning with Morgan’s “Watch Me” (performed in a fierce fiddle-laden arrangement quite different from the relative slickness of the 1992 hit version) and Tillis’ “Shake the Sugar Tree.”  Obviously, both ladies have had more than enough hits to fill up an entire set list (Tillis has had 13 Top 10 country hits; Morgan has had 14), but Tillis and Morgan did a fine job covering the main highlights of their careers, such that virtually any audience member could enjoy the thrill of hearing something familiar.  Though the hits dominated the set list, Tillis and Morgan also performed standout cuts from each of their most recent albums.  Tillis performed “Train Without a Whistle” from her 2007 career-best effort Rhinestoned, while Morgan gave a heartrending performance of “How Does It Feel” from 2010’s I Walk Alone.

A major facet of what makes Grits & Glamour such a broadly enjoyable show is the way its two headliners simply exude genuine love for great country music new and old.  They commented on the increased scarcity of ”real” country music in modern times, but Tillis nonetheless assured the audience that “We got it all – fiddles, steel guitar, mandolins – and we ain’t ever lettin’ go of it!”  Both ladies shared a common experience of growing up with the musical heritage of a famous parent – an experience they recollected with fond enthusiasm - being the daughters of singer-songwriter legend Mel Tillis, and of late Opry star George Morgan, respectively.   One of the night’s most memorable moments was a heartfelt tribute to Tillis and Morgan’s famous fathers, as they eased into a medley of George Morgan’s 1949 signature “Candy Kisses” and Mel Tillis’ classic composition “Burning Memories,” a hit first for Ray Price in 1964, and then for Mel Tillis himself in 1977.  In addition, the ladies also lovingly covered classics such as Skeeter Davis’ “The End of the World” and Roger Miller’s “King of the Road.”

As the show neared its end, Tillis and Morgan were met with the loudest applause of the night as they treated the audience to performances of their respective signature classics – Tillis’ “Maybe It Was Memphis,” and Morgan’s “Something In Red.”  They then rose to their feet for an inspired performance of gospel song “Jesus On the Line.”  After an encore, they returned to the stage to perform brief snippets of Morgan’s 1993 number one “What Part of No” and Tillis’ 1990 debut hit “Don’t Tell Me What to Do.”  Then came one of the biggest highlights of the evening as the two closed out the show by tearing into the rousing up-tempo number “I Know What You Did Last Night” – a new song which is to appear on Pam Tillis and Lorrie Morgan’s forthcoming Grits & Glamour duets record.  After the show ended, Tillis and Morgan headed out to the atrium to sign autographs for a crowd of enthusiastic concertgoers.

Needless to say, the Grits & Glamour concert experience was more than enough to whet one’s appetite for the ladies’ soon-to-be-completed duet effort.  The unique chemistry shared between the two outstanding talents was on full display throughout the evening.  If you have the opportunity to catch any of Pam Tillis and Lorrie Morgan’s future shows on the Grits & Glamour tour, you will be in for a real country music treat.

“Both Sides Now”
“Watch Me”
“Shake the Sugar Tree”
“Except for Monday”
“Cleopatra, Queen of Denial”
“A Picture of Me (Without You)”
“Train Without a Whistle”
Medley:  “Candy Kisses”/ “Burning Memories”
“The End of the World”
“Mi Vida Loca (My Crazy Life)”
“How Does It Feel”
“Spilled Perfume”
“King of the Road”
“I Guess You Had to Be There”
“Maybe It Was Memphis”
“Something In Red”
“Jesus On the Line”