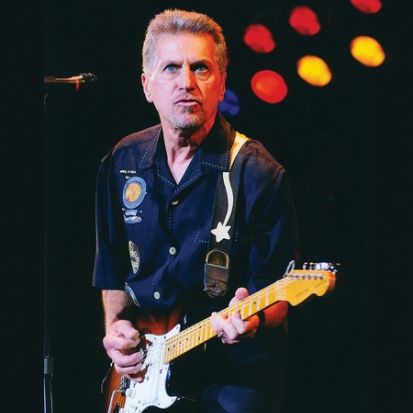 * 17 Gold records * 29 chart hits * Two Grammy Awards,* Sold more than 30 million records * The singer/songwriter/producer continues to perform before sold-out crowds worldwide. *The “Secret Agent Man” has many other accomplishments and has made significant contributions to the history of rock ‘n' roll.

• Began playing professionally at age 14 when he formed his first band, “Johnny and The Spades.”

• In late 1957 at age 15, Johnny Ramistella went back to New York City where he met the legendary D.J. Alan Freed, who got him a record deal with Gone Records. Johnny changed his last name to Rivers.

• In 1958, while performing on the “Louisiana Hayride” in Shreveport, LA, Rivers was introduced to Ricky Nelson’s guitar player, James Burton, who took a song Rivers wrote, “I’ll Make Believe,” back to Hollywood and played it for Nelson who recorded it. Rivers hopped a plane from New Orleans to Los Angeles where he hooked up with Burton, met Ricky Nelson and struck up a friendship.

.• In 1959, Rivers met southern comedian Brother Dave Gardner, who introduced him to Hank Williams’ widow Audrey. Audrey invited Rivers to Nashville where he met Phil Everly and a young Roger Miller. Audrey got Rivers a record deal with MGM, and he recorded two singles, “Darling Talk to Me” and “The Customary Thing.” Audrey also introduced young Rivers to the legendary Carl Perkins and Sam Phillips.

• In the early 1960’s, Rivers returned to Hollywood where he hooked up with Jimmy Bowen, Glen Campbell and Capitol Records producer Nick Venet. While under Jimmy Bowen’s wing, Rivers recorded his first album, “The Sensational Johnny Rivers,” for Capitol, produced by Venet. The album, released in late 1962, only received regional airplay.

• While performing at the Thunderbird Hotel in Las Vegas in 1963, Rivers met New Orleans legend Louis Prima, who booked him at the Sahara Hotel in Lake Tahoe, then the “Dream Room” on Bourbon Street.

• In January of 1964, Rivers opened the now world-famous Whisky à Go Go, where he recorded “Johnny Rivers Live at the Whisky à Go Go” and released his first #1 single “Memphis.” This ushered in the decade known as The Go Go Generation.

• In 1965, at the session for “Mountain of Love” produced by Lou Adler, Rivers brought together for the first time the rhythm section which would define the West Coast Sound of the 60’s: Hal Blaine, Joe Osborn and Larry Knechtel.

• Rivers then signed The Fifth Dimension to Soul City and an unknown tunesmith, Jimmy Webb to Rivers Music.

• Rivers gave Glen Campbell the Webb song, “By the Time I Get to Phoenix,” which became Campbell’s first #1 country hit.

• During this period, Rivers appeared on The Red Skelton Show, American Bandstand, The Hollywood Palace with Judy Garland, The Milton Berle Special with Lucille Ball, and The Ed Sullivan Show, among others.

• In 1967 Rivers, along with Lou Adler, John Phillips, and Paul Simon, founded The Monterey Pop Festival, where Rivers also performed.

• In 1968, Rivers produced one of his finest albums, “Realization,” which featured the hit “Summer Rain.”

• Rivers also scored with two Motown classics: “Baby, I Need Your Lovin’” and “Tracks of My Tears.”

• In the 1970’s, he returned with “Rockin’ Pneumonia & the Boogie Woogie Flu,” “Blue Suede Shoes,” “Help Me, Rhonda” (which featured Brian Wilson on vocals), and his classic “Slow Dancin’ (Swayin’ to the Music).”

• While hosting one of the weekly “Midnight Special” television shows, Rivers brought Wolfman Jack on as his personal guest, after which Wolfman became the show’s host for 12 years.

• In 1991, while Johnny was touring with the E-Street Band, they were joined by President Clinton at his Inaugural Ball, where the President jammed with the group on his saxophone.

• In his best selling book, “Chronicles, Vol. One,” Bob Dylan said, “Of all the versions of my recorded songs, the Johnny Rivers one was my favorite … When I listened to Johnny’s version of “Positively 4th Street,” I liked his version better than mine.”