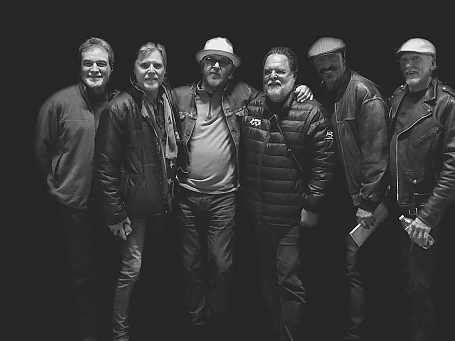 NASHVILLE, Tenn. (August 27, 2020) – Pop/country crossover hit-making band, Exile, has signed with Ontourage Management, spearheaded by Tony Conway, widely recognized as a leader in the production area of live entertainment and recipient of numerous industry awards, for exclusive management representation. Distinguished as the longest running self contained American vocal group, the Kentucky Music Hall of Fame members have continued to tour performing their greatest hits, fan-favorite on-the-road songs from over the years and newly released music. The band is known for major hits including “Kiss You All Over,” “Give Me One More Chance,” and “I Don’t Want to Be a Memory,” to name a few.

Exile has also signed with The Kinkead Entertainment Agency, one of the premier booking agents in the entertainment business. CEO, Bob Kinkead, brings three decades of knowledge and experience to the table of putting many of entertainment’s biggest names in front of the public.

"We've known Tony for decades, back from when Exile was just another struggling Kentucky band. It's a real pleasure to finally get to work with someone we've respected for years, and more importantly, consider to be a friend!”  states Marlon Hargis of Exile. “It's also great to work with Bob and all the Kinkead staff - good people, doing a wonderful job, particularly helping us through the 2020 Covid-19 disaster!"

“Exile was the first band I promoted when I was a sophomore in high school. Some people and music come into our lives, leave footprints, touch our hearts, and we are never the same. Exile is one of those amazing groups of talented musicians , songwriters and entertainers,” stated Ontourage Management - Tony Conway. “We look forward to working with them to expand the brand and legacy of Exile that they have created for the past 57 years.”

“My team and I, here at Kinkead Entertainment, have represented Exile since Nov 2019. It has been a great ride lining up all the shows and events throughout the USA, until the CO-VID virus hit our nation in March. We managed to move most of their dates into 2021. We are excited to get Exile back on the road, and in front of their fans, performing their biggest hits,” shared TKEA’s Bob Kinkead. “Exile will kick-off their tour in January 2021, starting in Texas, pending no more spikes or setbacks with regard to the virus. We are extremely excited to be in business with the Conway Entertainment Group, the new management company for Exile. 2021 looks bright!”

2020 documents the 57th anniversary for the band, which formed in Richmond, Ky. Since beginning in 1963 the band has had No.1 hits on both the pop and country charts, achieving ten No.1 hits on the country chart.

The band is excited to announce new projects in the upcoming future as well as a tour schedule for 2021. More information on Exile can be found at http://www.exile.biz/.

Exile formed in 1963 looking to play small clubs in Richmond, Kentucky, but managed to top both the pop and country charts during their over 55 year-long career. Their most successful hit, “Kiss You All Over” spent four weeks at the top of Billboard’s pop chart in 1978. In the early 1980’s Exile started to focus on country music. During their run on the country charts Exile has successfully had ten No. 1 singles including “I Don’t Want To Be A Memory” and “Give Me One More Chance.” The hit song "Kiss You All Over" was used in the 1996 Adam Sandler movie “Happy Gilmore” and in the 2006 film “Employee of the Month.” They have toured with acts including Aerosmith, Fleetwood Mac, The Oak Ridge Boys, Kenny Rogers and The Judds. The 5 original Exile members re-formed in 2008 and continue to tour today. Current members of the band include J.P. Pennington, Les Taylor, Sonny LeMaire, Marlon Hargis and Steve Goetzman. 2020 celebrates 57 years for the band and the 42nd anniversary of the hit song “Kiss You All Over.” For more information, visit www.exile.biz.

Ontourage Management oversees all aspects of an artist's career and is prepared to advance any type of career to the next level.  This is accomplished by focusing on touring, recording, marketing, electronic social media and networking, imagery, publicity, songwriting, publishing, live performance, media training, sponsorship, licensing, merchandising, and literary, film, and television opportunities.  It is integral to have a comprehensive team in place, and Conway has contacts in all areas of the industry, from business management to legal and public relations.

About The Kinkead Entertainment Agency: