THE STEVE MARTIN PRIZE FOR EXCELLENCE IN BANJO AND BLUEGRASS 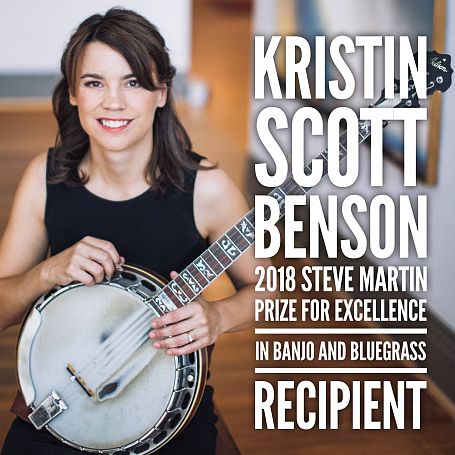 Banjo player extraordinaire Kristin Scott Benson is the 2018 recipient of the 9th annual Steve Martin Prize for Excellence in Banjo and Bluegrass.

Kristin Scott Benson is the four-time International Bluegrass Music Association’s Banjo Player of the Year (www.ibma.org). She has been a member of the Grammy-nominated bluegrass band, The Grascals (www.grascals.com), since 2008.

Kristin has attained a national identity as one of the top bluegrass banjo players, exhibiting impeccable taste, timing, and tone. With an attentive ear to back-up, she is known and respected as a true team player. In addition to her latest album Stringworks, Kristin has recorded two prior banjo albums, Straight Paths and Second Season. Both received stellar reviews, as well as an IBMA nomination for Instrumental of the Year for the self-penned, “Don’t Tread on Me”, on Second Season. After 13 years in Nashville, Kristin relocated back near her original home, in the Carolinas, where she lives with her husband and son.

The Steve Martin Prize for Excellence in Banjo and Bluegrass provides the winner with an unrestricted cash prize of fifty-thousand dollars, as well as a bronze sculpture created specifically for the prize by noted artist Eric Fischl. Created to bring recognition to an individual or group for outstanding accomplishment in the field of five-string banjo or bluegrass music, the prize highlights the extraordinary musicianship of these artists and bluegrass music worldwide. The winner is determined by a board consisting of J.D Crowe, Pete Wernick, Tony Trischka, Anne Stringfield, Noam Pikelny, Alison Brown, Neil V. Rosenberg, Béla Fleck and Steve Martin.

The award is given to a person or group who has given the board a fresh appreciation of this music, either through artistry, composition, innovation or preservation, and is deserving of a wider audience. Recipients must be a professional or semi-professional and should currently be active in their careers.

The award is funded personally by the Steve Martin Charitable Foundation.