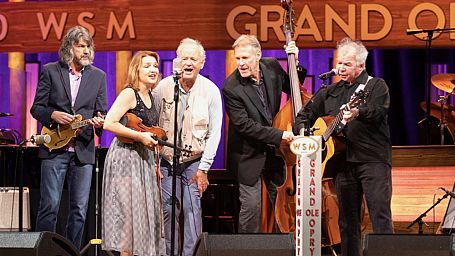 Folk-hero actor, a longtime fan of the Steeldrivers, crashes the stage to make his Opry debut

Bill Murray surprised fans at the Grand Ole Opry on Tuesday night, crashing the stage to perform John Prine’s “Paradise” with Prine and the bluegrass band the Steeldrivers.

Murray is a passionate fan of the Steeldrivers since the group’s days with then singer Chris Stapleton. Appearing onstage for their scheduled Opry performance, the Steeldrivers welcomed Prine to join them, before banjo player Richard Bailey announced another special guest, one that seemed to surprise even him.

“I was just given a news alert. We have another old friend of the band who we actually appeared in a movie with… Mr. Bill Murray,” said Bailey, introducing the actor, who enlisted them for his 2009 film Get Low.

Dressed in a blue shirt and cream vest, Murray took his position next to upright bass player Mike Fleming and fiddler Tammy Rogers, leaning in to sing Prine’s chorus about “Mr. Peabody’s coal train.” During an instrumental break, Murray walked to the mic and addressed the crowd: “This is my first appearance at the Opry.

Murray has been known to unexpectedly pop up at Steeldrivers concerts. In 2017, he bought tickets to the group’s show in Charleston, South Carolina, and randomly distributed them to fans outside the theater.

Prine is set to headline two shows at the former home of the Opry, the Ryman Auditorium, on October 5th and 6th. Earlier this month, he was named Artist of the Year at the 2018 Americana Honors & Awards.