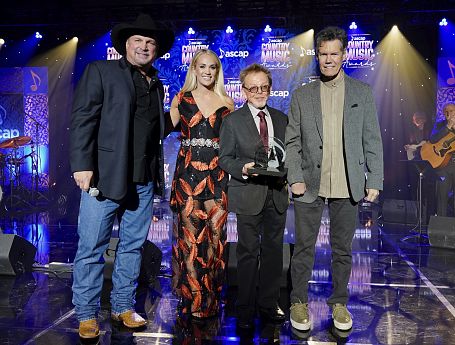 “This man saved country music single handedly.... I wouldn’t be standing here if it weren’t for Randy Travis," said Garth Brooks as he welcomed Randy to the stage.

“Your music became a symphony to the lives of millions,” Mary Travis said to her husband. “The songs that you left us before your stroke six-and-a-half years ago will remain the soundtrack of our lives Forever and Ever, Amen.”

These awards celebrate the songwriters and publishers of ASCAP’s most-performed country songs. Travis joins the ranks of Rodney Crowell, George Strait, Alan Jackson, Ricky Skaggs, Jackson Brown, Garth Brooks, Emmylou Harris, Tom Petty and Neil Young, among others, as a Founders Award recipient. This particular award is one of ASCAP’s highest honors, which is presented to songwriters and composers who have made significant contributions to music and inspire and influence the music community.