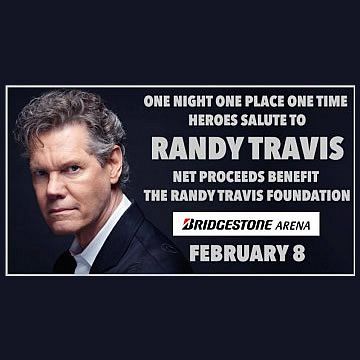 If there was ever a country star worthy of an all-star tribute concert, Randy Travis is it. The country legend received a tribute as memorable as his career on Wednesday night (Feb. 8) at the 1 Night. 1 Place. 1 Time: A Heroes and Friends Tribute at Nashville’s Bridgestone Arena.

Sitting at the side of the stage with his wife Mary for the duration of the show, Travis beamed with pride as one act after the other took the stage to pay tribute to him. The star-studded affair brought out more than 30 of country music’s brightest acts, from legends to rising stars, including Garth Brooks, Travis Tritt, Tanya Tucker, Wynonna Judd, Michael Ray, Chris Young, Chuck Wicks, William Michael Morgan and many more.

Tritt, a longtime fan of the country legend, humbly thanked Travis when he took the stage, saying he “opened up so many doors for us in country music” and brought many more fans to the genre than ever, before offering up a great performance of “Better Class of Losers.” Jamey Johnson delivered a harrowing staging of “Promises,” strumming his guitar while Alison Krauss and a chorus harmonized at various points in the background. “God bless you Randy Travis, I love you,” he said after the standout performance. Krauss herself took the stage moments prior for a beautiful solo rendition of “Deeper Than the Holler.”

Newcomer Chris Janson earned himself a standing ovation with his production of “Look Heart No Hands,” which had the crowd going crazy, while Kenny Rogers also brought the audience to its feet for the duration of “Love Lifted Me” in addition to his own signature hit, “The Gambler.” Kane Brown also offered up a strong interpretation of “King of the Road,” with a swanky rendition of Travis’ version of the Roger Miller hit, showing off his country twang and sounding just like a young Travis.

“Thank you for paving the way for us younger artists,” Michael Ray said before diving into a solid rendition of “He Walked on Water.”

It wouldn’t be a tribute to Randy Travis without hearing his many signature hits. Scotty McCreery did the legend proud with “1982,’ as did Josh Turner on the chart-topping hit “Three Wooden Crosses.” The legendary Tucker also paid homage to her good friend and fellow icon with a stunning performance of the No. 1 track, “I Told You So.”

The grand finale couldn’t have been any bigger, with Brooks closing the night’s set with perhaps Travis’ most notable hit, “Forever and Ever Amen,” with Travis himself singing the track’s final “amen.” All of the night’s performers took the stage with Travis to sing a powerful rendition of “Amazing Grace,” with Travis singing right along with them. The star-studded crew added a surprise performance of “Will the Circle Be Unbroken?” to end the show.

Backstage before the all-star production, Travis and Mary said it’s an honor to have so many artists come together to commemorate the legend and his career. “It means the world to me,” Mary says. “It just reminds me of the 40 years of music that he’s made and how important it is to not only his fans, and the world of music as a whole, but also the artists that influenced him and that he influenced.”