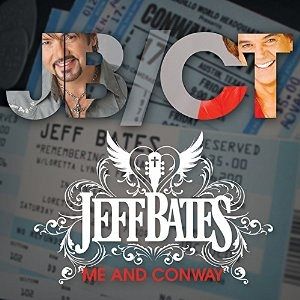 The vocal similarities between Jeff Bates and the late Conway Twitty have always been something of a double-edged sword.

"It was a struggle at times," the singer tells Billboard. "On one hand, what a compliment. But, then someone would say, 'You know, you sound too much like Conway Twitty.'"

However, Bates says he is glad people feel that way. "Sometimes, you just have to say if that's what people think, let them think it. It is a compliment, and I'll own it," he says proudly.

The soulful singer has just released a tribute collection to the Country Music Hall of Fame member called Me and Conway. When asked if he heard the similar vocal styles, Bates says, "We're both from Mississippi, so we had the same way of enunciating words, and both had a little bit of an R&B/soul background. So there's that, as well as the gravel in my voice. He strongly influenced my music along withElvis, Joe Cocker and a lot of great country singers. At the same time, I've got my own sound, so I do things that are different stylistically from what Conway did, but I also have recorded many that are very similar."

Me and Conway is full of Twitty classics such as "I'd Love to Lay You Down" and "Don't Take It Away," as well as six new tracks that Bates recorded with the singer in mind. The singer tried to choose songs that spoke to the female demographic -- just as Twitty did.

"I just did an album release party, and I told people that Conway was great at saying what women needed to hear, which was things that guys like me wanted to say but wasn't sure how. That was the epitome of who he was and what his music was all about."

One of the highlights of the album is "Lost in the Feeling," originally a No. 2 record in 1983. One of Twitty's more traditional records of that era, the track featured a young Ricky Skaggs on harmony, as well as some textbook steel-guitar licks from John Hughey. Playing the part of the latter on this session was ACM Award winner Mike Johnson. Bates chuckles when he talks about the recording process for the song.

"Mike couldn't make the session, so he came to my house. We were trying to figure out where to set his steel-guitar amplifier up. He was so gracious and thanked me for the opportunity to do a song that John Hughey had played on. We set the amp up in the bathroom, and he sat right there at the console and played. It was his first and only take. He's a pro, for sure."

One song that might have Twitty fans scratching their heads is "Slow Burn," a 1984 chart-topper -- for T.G. Sheppard. Bates says it's a song he felt Conway could have knocked out of the ballpark. "I love T.G. Sheppard. I covered all of his songs on stage for years. It wasn't a Conway song, but it should have been. So many of his songs were sensual and sexy, and it would have fit."

The disc closes with a duet of the Grammy-winning classic "After the Fire Is Gone," complete with Twitty's longtime duet partner, Loretta Lynn, which Bates said was a moment he will never forget.

"I had met her years ago at the BMI Awards, but to get invited out to the ranch to sing with her was incredible. I picked that song to do because it was the first vinyl record I saw in my life. My mom had ordered it, and it was the first time I heard either one of it. Both of them were two of her favorite singers, so you fast-forward to last year, and getting to walk on stage with her, and have her taking to my music meant a lot. I got to hang with her on her bus and told her what I was doing. I asked her to sing on it with me, and she said, 'I'd be proud to sing on your record.' She's an amazing lady and an amazing talent -- one that fame and the status of legend has not changed in the least."