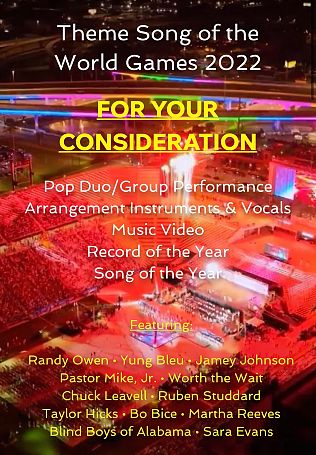 Theme Song of the World Games 2022

At a time when global unity is needed more than ever, this song encapsulates the strength and power of a moment where athletes, teams, coaches, entertainers and fans from all different walks of life and cultures came together in Birmingham, AL’s presentation of the The World Games 2022. "Hope of Alabama" served as the official theme song of these games and features some of Alabama’s most iconic musical stars, including Randy Owen of the Group ALABAMA, Hip-Hop Artist Yung Bleu, country stars Sara Evans and Jamey Johnson, Stellar Awards Gospel Artist of the Year Pastor Mike Jr., NBC’s The Voice top contestants Worth the Wait, Rolling Stones’ keyboardist Chuck Leavell, American Idol winners Ruben Studdard and Taylor Hicks, American Idol runner-up Bo Bice, Motown Legend Martha Reeves, and the Legendary Blind Boys of Alabama, with the combined youth and adult choirs of The World Games 2022.

Produced by World Games Artistic Director Dr. Henry Panion III and penned by Alabama’s Randy Owen, his daughter Allison Owen, and Panion, “Hope of Alabama” brings a fresh voice to the world from a community that has experienced its share of trials, hardship, and tribulations. Yet, through its music, represented by this broad range of Alabama artists, the message of “Hope of Alabama” is one of eternal unity and love to the world, especially in these troubled times. As the athletes from across the globe descended on Birmingham, Alabama for The World Games 2022, these Alabamians sent them back to their homelands with more than just medals, but with this message: “Hope of Alabama is the hope for all the world. Every man can hold on, every woman, boy, and girl. It is the dawn of the new day, when love is what we bring. Ev’rybody sing, sing, sing!”